Bear's Release from the Chain

In the days leading up to the release date we were all getting nervous. We had visited Bear a couple of times and he growled at us and seemed so afraid. The night before the Release, Bear seemed to sense something else was going on. In this video we see some glimmer of hope. Notice, however, how tucked his little tail still is.
All night we worried. Would the people who signed the release for Bear actually let us take him? They did not want him, but it was made very clear that they did not care that he was going to a better place. They did not like Bear and to them he was a thing that they could just ignore and starve. Everyone involved in the rescue worried that evening. 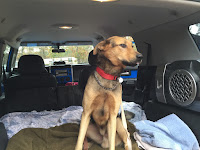 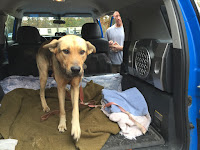 Ready to muzzle Bear, wear protective clothing in case he wanted to bite us, bright and early Saturday morning we loaded up the SUV and headed out.  We planned for this to be difficult. But, we got the GREATEST surprise of lives. The moment Bear's chain came off, his tail came up and began wagging so fast I was afraid he would take off! He actually RAN towards us. He was grateful, he was ready and he TRUSTED us to take care of him. I cannot describe in words the honor I felt by his trust. He had no reason to believe in us, but he did. This is a dog's greatest strength and their biggest weakness - trusting humans. See the video of his release.

Bear's Birthday from cris on Vimeo.

Stay tuned for the next blog about his medical checkup, but I MUST share this little teaser... to our absolute amazement, this boy is Heartworm Negative! Just like his unexpected joy in seeing us, this was another unexpected miracle.
Posted by GSRA Pack Leader at 5:04 AM