Buster Leaves Us Too Soon
We are so sad to tell our fans and followers that Buster passed away shortly before Christmas, after suffering a sudden decline in health.  We thought at first that he had injured a leg and would respond to a few days of rest and pain control, but it was soon evident that the situation was far more serious.  A dedicated team of GSRA volunteers and vet clinic staff kept him comfortable through his final days and surrounded by love until the very end, and all were touched by his gentle spirit.

Of course, all GSRA dogs are equally worthy of finding loving homes, but it’s hard to deny that there was something special about Buster that went much deeper than his stunning good looks.  We’ve tried to convey that in these blog posts, and I hope it has come through.  My intent in this final post is to share some of my favorite memories of him.

This was taken shortly after Buster came to my home for foster care.  I had constructed a barrier to keep the dogs out of the kitchen while I mopped the floor, and happened to glance up to see that my labors were being watched.  Do you see a Buster-sized hole there?  Me neither.  This was an early indication that Buster had “opinions” about things and would apply his considerable determination to overcoming obstacles.  Maybe there’s a lesson there for all of us.
Buster was proud at the reunion picnic to see so many people wearing “his” tee-shirts.  If anyone isn’t aware, that’s him on the back of the blue tie-died shirts.
Another happy memory from the picnic was this wonderful photo of Buster with the rest of the Fab Five (from left to right:  Tina, Buster, Georgia, Gunner, and Queenie).  This so perfectly captures the work of GSRA that no additional words are needed.
During group snuggle time, Buster uses body language to tell us what he thinks about his place in the pack. 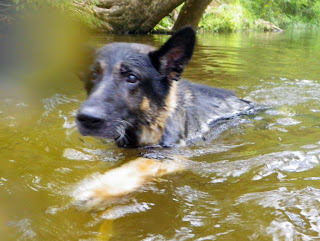 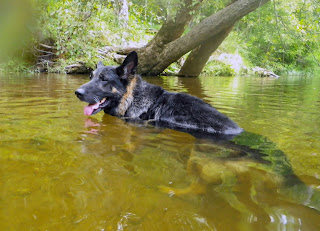 In late September Buster had what was probably a new experience for him:  a hike in the woods to a river swimming hole.  He was fascinated by all the autumn smells in the woods and kept up a steady pace for the two-mile round trip, which was a big walk for him.  At the river, determination to follow his people took him into the water and swimming!  He wore a look of surprise initially, but then soon relaxed and paddled around for a while.  He also enjoyed lying right at the water’s edge and taking in the scene.  Now that he’s gone and I no longer have his gentle presence in my home, I find myself remembering this day, Buster’s own perfect “moment in time.”  One day, when the time is right, this is where I will return to scatter his ashes.
The tragedy of loving these magnificent dogs is that we outlive them by so much.  We dearly wish that Buster could have had more time in his new life, but he surely embraced the time he did have.  Rest in peace Big Guy, you touched so many of us.
Posted by GSRA Pack Leader at 12:53 PM 4 comments: