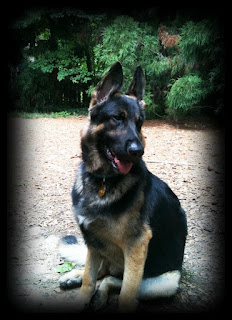 Last Memorial Day, I was asked by one of our Directors to go and help assess 7 dogs that were in Clayton needing rescue.  This was a day that I would never forget.  We met the Guardian Angel named Angie, a kindhearted, loving Animal Control Officer that was trying to find a rescue that would take these 7 dogs from a difficult neglect situation.  She devoted her time, energy, and love coming out twice a day, to feed and clean the kennels and spend time with them.  She did this for three months!   What we saw we would never forget.  These 7 magnificent dogs were shut down emotionally, in bad health situations, and needing to find foster homes ASAP.  We all vowed that day to get those dogs out and find foster homes for them.  We bathed and brushed them in 100 degree heat.  We took the dogs for a walk, but that feat in itself was challenging.  Each dog wanted desperately to get back into its safety zone of the small kennel walls.

Gunner was the youngest of the Magnificent 7 dogs, which became the Fabulous Five.  He was two years old, living in a small kennel with his 11 yr old mother.  He was a frantic dog, scared of everything around him outside of his kennel walls.  Gunner’s first walk was done by a young Johnston County volunteer named  Allie. I should say that Gunner took her for a walk, since he was wild on a leash- LOL!  To see all of these people there to help was such a heartwarming feeling, each one coming out on this hot day to help these animals.  This was true rescue, down in the trenches amongst the dirt and filth.  In rescue, it is our gift to see beyond the sadness and defeat, and see the true soul that lies beneath that exterior.  These dogs had such huge potential that we just couldn’t leave them behind.  We started going out to see them in our spare time, and with each visit there, they started opening up more.  A moment that I will never forget was when Andrea, Angie, and I took all five dogs for a walk.  They were actually happy now to be outside of the kennel, and Tina, Buster, Queenie, and Gunner wanted to continue to walk longer distances, but Georgia wanted to head home since she just wasn’t quite ready yet to be out for long periods of time.  Seeing the happiness on their faces and made it all worthwhile! 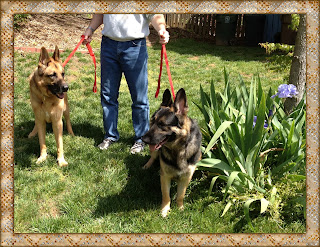 Gunner was skittish to human touch since this was a new experience for him.  Watching him walk on grass for the first time was almost heartbreaking, since the touch of the grass scared him.  He would walk around in circles and the longer that he was exposed to a new situation, the worse it would become to the point of spinning around.  We knew this dog would be one of the most difficult to handle since he spent his whole life in that kennel and had NO socialization.  Gunner came into foster care first.  He was the most nervous dog that I have ever experienced.  I spent the night on the floor with him with my hand on the crate door that first night.  As it turned out, Gunner cannot be crated.  It is too much for him to mentally deal with.  Slowly, day by day, he started to emerge into a different dog.  It did take me a month to house train him.  Our house became the safety place like his kennel was, so when he went outside, he would panic and make a run for the house.  It took lots of patience and treats, and then one day it just happened.  What a glorious day for me!

Fast forward to one year later.  I adopted Gunner on Christmas Day.  I love this dog so much that I could never have let him go.  We have been through so much together and are extremely bonded!  Gunner has developed into a well-balanced, very happy boy.  He absolutely LOVES to play!  If no one is interested in playing with him, no worries, he will play by himself.  He will nip at a blade of grass and take off running.  He also loves to chase squirrels and has many to run after here!
He went to the beach last fall and absolutely LOVED walking in the ocean water and going for long walks.  I was very surprised, since he was completely out of his environment.  This was a huge turning point for him. He just walked straight into the ocean without hesitation!  Seeing the joy that it brought him, and therefore me, made it all worthwhile.   He was open to new experiences after his beach trip.  I really have to thank my current pack for helping to socialize Gunner.  People can only teach a dog so much, they learn much more from their pack members.  I do try to bring Gunner to some of the GSRA events, since this helps to continue to socialize him with other dogs and new people.  For a long time, Gunner was skittish to new people.  Now he goes up to them to say hello.  He is still cautious, but not afraid.  A big hurdle for him was when he started overcoming his fear of children.   I think that the quick sudden movements and higher energy levels of children would almost paralyze him with fear. 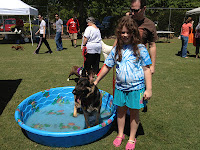 For almost a year, he would quickly dart away from my 9 yr old daughter.  Now he goes up to her, will let her pet him, and often gives her licks of love!  He is able to comfortably lie next to her and will let her pet him and actually enjoy it.
Gunner also during this past year underwent water therapy due to his conformation.  As you may remember, he has hip dysplasia, and due to his lack of exercise in his prior life and had poor muscle mass and strength.  We exercise him a lot with low impact activity, do sit and stand exercises, and he underwent water therapy on a treadmill.  The water therapy was a gift from another Guardian Angel!  We couldn’t have done it without him!   It has made a difference to Gunner, and he now sits up higher on his haunches.  His muscle tone is much better, and he has good muscle mass.

Gunner’s seizures have been few and far between, thank goodness.  The last one he had was at Bark Around the Park, and was just a mini seizure.  We continue to monitor for them, and if they become more frequent or severe, then we will have to start him on medication.  For now, we are sitting tight.

In looking back at this past year, it has been a tremendous growing experience for my family and I.  We have watched Gunner turn into a well-balanced dog, who has a true love for life.  Seeing the happiness on his face and getting the best dog kisses ever make it all worthwhile.  Whenever I look at him, I see this happy goof ball and can’t help but smile.  He lifts my spirits up and makes me sit back and appreciate the little things that life has to offer.  He has been a true gift for me!
Posted by GSRA Pack Leader at 3:00 PM 1 comment:

These original Seven Dogs touched the life of so many. These are the reflections of the rescuers, 1 year later.

Angie L. the original rescuer of these beautiful dogs... 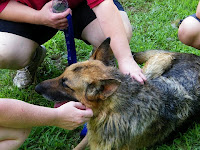 Reflecting back over the events of the past year brings back a flood of emotions! I fell in love with these dogs instantly (as we all did) . I first met these gorgeous dogs when they were at their lowest point in life. Diesel could not walk, Susanne had mammary tumors, Queenie and Gunner were terrified of their own shadows and and Buster joined everyone in being matted and neglected.

However, I saw hope and light. Each time I visited I saw these dogs begin to blossom and begin to change before my eyes. Each visit with the dogs resulted in a new breakthrough. Slowly, I was beginning to see lights come on in seven pairs of eyes! I, however, was drowning. Emotionally, I was drained. I knew no one that would or could help me. These dogs needed so much more than I could give them.

Memorial day 2011, GSRA came with volunteers, good food, supplements and most importantly ….LOVE! From that moment on, we were not alone anymore. The dogs and I had friends that were unfailing in their dedication to helping save these dogs! I cannot adequately express the feeling of sheer relief that came to me when GSRA wrapped their arms around all eight if us and said “don't worry, we are here now”.

From that moment on, life got better. Diesel and Susanne went to the Rainbow bridge surrounded by the love of a GSRA volunteer and myself. Sadly, they were not freed from their past life in the way we all hoped for, but freed nonetheless with love. Over the next few weeks I watched these dogs leave…never to look back at the hell they lived for years.

In October, I got the honor to see the Fab Five all together again and loved by their families. This is by far, the most rewarding experience I have ever had! Not only did I help save these dogs, but I met the most fabulous people that I am honored to call my friends! Yesterday, I assessed another shepherd and last week I pulled another one from my local shelter that is now safe in a GSRA foster home. I am so happy to be a part of the lifesaving GSRA team and so happy that the fab five all got to know the love and security of a family. 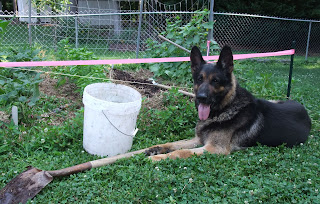 Most people who have followed this blog and the story of the remarkable Fab Five know that we lost Buster shortly before Christmas 2011. I’ve struggled over what I wanted to say in this final public post about him. I’ve also struggled to choose just favorite photo to post, but searching through the photos brought me to what I wanted to say. This photo was one of the first I ever took of him, taken the morning after his first night with me. My intent was to let him poke around in the yard, figuring out what this new place was, while I would work in the garden and keep a watchful eye on him. Wrong! It didn’t take him more than a few minutes to decide that I was the one who needed keeping an eye on, so he settled down at the edge of the garden and made sure I did things just right. This set the tone for pretty much all that followed with him; whatever I was doing, it must be intensely interesting and required his full attention! The thing I love most about this photo, and it took looking again after all this time to see it, is that it shows how willing he was to live in the “here and now,” rather than the “what was.” Look how much he’s come back to life after less than 24 hours in a dog-friendly home! He was blessedly free of the emotional scars that troubled the other dogs to varying degrees, somehow being able to never look back. Although we dearly wish he could have had longer in his new life, we truly did rescue his spirit. And that’s always the goal, isn’t it? accomplished.